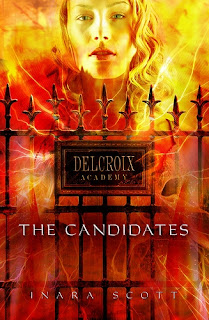 What if you were recruited to attend the world's most prestigious prep school? A training ground of sorts for the rich, the famous, and the powerful? Would you accept the full-ride? What do you think would be asked of you in return?
In Inara Scott's debut YA fantasy Delcroix Academy,  this is exactly what happens to Dancia Lewis. She's a girl who has spent her whole life blending in to the background. "Blending in" - not "fitting in". She avoids making eye contact or even making friends. Why? Because when she cares about people, watch out! Her paranormal powers will come to their rescue if ever they're in need. This might sound like a good thing. And it could be, except for one tiny detail: she has absolutely no control over how to use those powers. And people get hurt. Cars skid out of control. Bridges collapse. That sort of thing.
Why has Delcroix Academy recruited her, a wallflower B-student?  What, if anything, do they know about her powers? And why are two hot guys- a top student and a rebel- suddenly taking an interest in her?
Well, I'm not telling you. You've just been recruited to find out for yourself. In the meantime, let's find out what Inara Scott has to say about it all.
AB: Congratulations on the publication of your book, Delcroix Academy: The Candidates. You wrote this book at a time when domestic surveillance in our country is increasing. Could you tell us a bit about how you came to write this particular story?
IS: It's interesting you picked up on that -- I'm surprised how few people have! I was writing The Candidates in 2006-2007, when the war with Iraq was falling apart and the country was wrestling with big issues around preemptive actions against governments, surveillance of US citizens, and treatment of potential terrorists. I didn't write the story as a deliberate exploration of these topics, but there's no doubt they were a part of my thought process. And by the way, I don't have a black and white answer to whether these things are right or wrong. That's really what Delcroix Academy is about -- how mixed up and grey all these issues are.
AB:  How long have you been writing? How long did you work on Delcroix Academy: The Candidates? What was the timeline between the kernel of the idea to publication?
IS: I've only been writing fiction since 2005, but for most of my life I've been writing in some way or another, including ten years in practice as an attorney. I wrote two adult romances before I started The Candidates in the fall of 2006. I sold the book to Disney-Hyperion in October of 2007, and it was released in August of 2010. So almost three years between sale and publication, which I can assure you is really really hard! 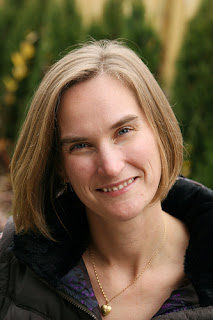 AB: In real life, how are you like your protagonist Dancia Lewis? How are you different?
IS: I'd like to think I'm independent, strong, and caring, like Dancia. But my hair isn't nearly as cool as hers.
AB: On your website you mention that you “fear deep, intellectual books and love romance and fantasies.” Can you think of any book in particular that you ‘fear’ (ie. don’t want to read!) and an example of romance and fantasy that you would read over and over again?
IS: Oh man, there are way too many "good" books to mention -- most of them the ones literary folks like best! I simply don't enjoy reading about violence and despair, and for some reason "they" who decide what makes "good literature" often think that depressing stories with miserable characters are of greater literary merit than stories with happy endings. "They" also seem to believe that books written by men are of greater value than those written by women, but that's an entirely separate issue...
I've heard many people say depressing stories are "more realistic" but I think it's a matter of perspective. For example, when the terrible tsunami hit in 2007; you could see what followed as an example of the dark and meaningless nature of life, while at the same time, you could see incredible stories of hope and caring. I find the latter much more indicative of human nature than the former.
AB: Ah. So you're an optimist with a penchant for seeing the good in people. Is that perhaps what led you to write for young readers in particular? What about YA appeals to you?
IS: For me, I like the openness of the genre, and the way readers demand a great story without pretension.
AB: What book is currently on your bedside table?
IS: I must admit, here's a stack of them! I'm reading The Adventures of Huck Finn (for the first time), a Regency-era romance by Julia Quinn, the diary of a woman who was a doctor for the Viet Cong from 1968-1970, a book about shamans, and The Case for God, by Karen Armstrong.
AB: What an eclectic selection, Inara! And here you are, writing about something completely different: a teen with supernatural powers. Which begs the question: do you yourself have any supernatural powers? If so, what? If not, then which powers would you like to have?
IS: Other than the fantastic ability to humiliate my children (which I think all mothers have), I am regrettably normal. If I could have one superpower it would be breathing underwater. My name means mermaid, and I always wanted to be a mermaid when I was little.
AB: Well, mermaid- I mean, Inara, then I must ask: what advice would you offer writers who are just sticking their toes in the water?
IS: Keep writing; don't expect your first novel to be your best. To switch to a dryer metaphor, imagine you are a violin player -- would you expect to get it right the first time? Of course not, but sometimes we set unreasonable expectations for ourselves as writers. Practice, search for feedback, and don't let fear get in the way of achieving your dreams.
AB: Can you give your burgeoning fan base a little teaser about your upcoming sequel, Delcroix Academy: The Watchers?
IS: All I can say right now is you can expect more romance, action, and danger. I'll let you know when "The Academy" authorizes me to say more.
Posted by Amy-Baskin.blogspot.com at 12:29 PM 1 comment:

The CYBILS are Coming!

Many of you have not only heard of the CYBILS, but have served as panelists or judges yourselves. But for those among us for whom the term conjures images of Sally Field in made-for-tv movies, let me set the record straight.

For over four spins around the sun, the CYBILS awards have been given yearly by bloggers to the year’s best children’s and young adult titles.  I am thrilled to be serving as a round 2 judge for the middle grade fiction category with an impressive and dedicated group of writers, reviewers and librarians.

What does this mean?  This means that it's almost time for you to nominate some books for us to read!

From October 1st through October 15th, we are seeking nominations for 9 categories:

Anyone can nominate books, but here are some guidelines.


Once you start making nominations, round 1 panelists start reading! They will read all the nominated books and finely whittle down that huge list into excellent shortlists.  They'll then present that shortlist to second-round judges (including me). We will then take that shortlist and come up with a winner.  This process happens with 9 different categories and panels of judges.


What Can You Do?

Are you pumped yet? I am! Join me to follow the nominations, read your favorites, make predictions!
Posted by Amy-Baskin.blogspot.com at 10:39 AM 2 comments:

Emily Whitman, author of Radiant Darkness, will be reading from her newest YA novel Wildwing tonight. Come with your listening ears and your hearts ready for tales of love and time travel.

Check out the Wildwing book trailer:

Makes me want to wear a bodice!
Posted by Amy-Baskin.blogspot.com at 2:31 PM No comments:

Musings on life, stories, and writing for both young and grown children.