Dear readers: I’m moderating a panel with industry friends on how bloggers and independent booksellers can work together for mutual benefit at the PNBA Trade Show today. This post contains notes on topics that my panel and I believe are worth discussion.

Bloggers and Booksellers Unite! (A.K.A. "Chance favors the connected bookseller.")

What do book bloggers actually do? How can independent booksellers join forces with bloggers for mutual benefit?

Well, let’s start with what the four of us on this panel do. I will quickly introduce myself and all of the panelists, then allow for each of of us to give a bit more of an in-depth self-introduction, as well as tell how in particular we would like to grow relationships.


I'm Amy Baskin,  your moderator. I write and read fiction for children and young adults. I'm serving as a middle grade fiction judge for the 2010 CYBILS (Children’s and Young Adult Bloggers’ Literary Awards). I also interview local authors and blogs about in-store book readings here at Euphoria and on twitter @AmyBaskin .

Cindy Hudson is the author of Book by Book: The Complete Guide to Creating Mother-Daughter Book Clubs (Seal Press, October 2009). She is the founder of two long-running mother-daughter book clubs, and she lives in Portland, Oregon with her husband and two daughters. She blogs about reading groups, authors, books, literacy and more at www.MotherDaughterBookClub.com and on twitter @momdtrbookclub and facebook at Book by Book.

Gabe Barber is a husband, father, son, brother, uncle, and book blogger.  Hopefully in that order.  He started the website ReadingLocal.com in January of 2009 as a means of exploring and promoting what’s happening in Portland's literary community.  Reading Local: Portland provides a venue for the Portland literary community to promote upcoming events, new releases, share links, and more. An avid consumer of books, you can often find Gabe in one of Portland's splendid neighborhood bookstores. On twitter @readinglocal  and facebook at Reading Local .

Carly Sascha Cohen is one of Portland’s gifted independent booksellers, working with satisfied customers at both A Children’s Place Bookstore and Reed College Bookstore. She holds a master's degree in publishing from Portland State University. While she most enjoys reading young adult novels, she's also a sucker for a good picture book. When not recommending books, Carly can be found reading out loud to her cat, Margot. On twitter at @AChildrensPlace  and facebook at A Children’s Place Bookstore.

How can independent booksellers join forces with bloggers for mutual benefit? All four of us will share ideas of how we have best worked together. But we also hope to brainstorm together with attendees and together make suggestions for new inroads we can explore.

Note: this is not a technical workshop. We won’t be discussing how to blog or post, but rather how booksellers and bloggers can develop symbiotic relationships. We can discuss what we should blog about, and how to utilize and advertise these blogs for mutual benefit.

Steven Johnson’s TED talk : Where Good Ideas Come From.  Viewing this is worthwhile. Johnson argues that ideas are new networks of neurons firing in sync. It follows that outer networks mimic inner networks and that great ideas develop when people come together through external, social connections. Johnson posits, “Chance favors the connected mind.” Johnson says that you should “allow your hunches to connect with other people’s hunches.” While there is much talk of protecting intellectual property and building barricades, we should really be spending more time connecting ideas. I urge you to consider that “chance favors the connected bookseller.” And right now, people are looking for inspiration online, through a very liquid network. It’s changing all the time. 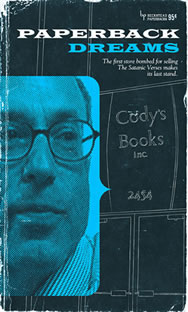 After watching "Paperback Dreams", this question comes to mind: How can booksellers strengthen bonds with customers who come in their store routinely, but end up buying books online? Answer: go where your customers are and engage them online.

Share. Don't "Bogart" the help, advice, recommendations, or other general information you offer by keeping it within the four walls of your store. Share it online. If you're not giving it, I as a customer will get it from someone else. In this information age, think of yourselves more as librarians do: as disseminators of information.

Be personable. Don’t be afraid! This doesn’t mean airing your deepest, most intimate secrets.  It means establishing a personal, respectful, engaged connection with others, while remaining professional.

Shape your online presence.  Why? This is all about bringing people together quickly and cheaply around points of shared interest, namely: books. And remember this motto: Chance favors the connected bookseller!

Be of value. What is your store's angle? Shape it. Give value to your store and online presence by defining your purpose. What do you specialize in? What do you want your store to be known for? What can you offer your potential customers that is specific to your bookstore? If you participate routinely in the conversation using social media, then you as a bookseller help to shape the conversation. If you don't, someone else will.

Indie bookstores are not just places to buy books: they’re welcoming, culturally rich meeting places for intelligent discussion, learning and soul searching.  Make your bookstore reflect this in your online presence as well.

Become a part of your customers’ online world. Give them a reason to walk outside of their homes. Your customers, browsing in your store, purchasing occasionally, are buying most of their books  online. How do you strengthen your bond with those customers and even bring new customers in? Go online and engage them.The fact is customers are coming into our stores less often than before. They’re getting their book fix online: reading about books, talking about books and buying books.

Don't think 'us and them.' Think 'we'. Don't obsess over the duality of online booksellers vs. brick and mortars. Join twitter, facebook, indiebound, goodreads, LibraryThing. Learn how to use Ning, disqus, and glue to centralize your blog conversations and inform your buying decisions.  Get a facebook business profile for your company. Keep it separate from your personal profile, so that anyone can ‘like’ or ‘friend’ your company. Post links to interesting blog articles that relate to books or authors/ illustrators you would like to highlight at your store. Push sales that way. Solicit friend/fan input on the books they’d like to see you sell in-store. Who would your fans like to see at a book-signing at your store? Consider having bloggers be co-administrators of these pages, helping your store maximize its outreach.

Join the conversation. Don't just broadcast your point of view. Listen. Bring people together quickly and cheaply around points of shared interest, namely: books. Check out the #followreader  and #bblog hashtags for numerous examples of these conversations of interest to booksellers. Familiarize yourself with hash tags. Use them to your benefit.


Q: What can bloggers do to help? A: Be your champions.

2) Form monthly online or in-store book clubs.  The blogger can link to information about it online. Important: bloggers can help update your information. Keep it current. Your online presence is only as useful to you as it is to others.

3) Help as co-administrators for your social media sites.

5) Help booksellers leverage vast blogger networks. Cindy Hudson uses user demographic info to promote in-store events through her regional newsletter lists. For example, Cindy helped with promotions for store visits with Ingrid Law and Heather Vogel Frederick at independent booksellers in the Chicago area. She offered contests and 'meet with the author' promotions through targeted newsletter mailings that benefited the authors, their readership and Chicago bookstores.

6) Offer DIY promotion tie-ins for your store. For example: “Mention W blog until X date and get a Y% discount at Z store. (Not for use with other store offers.)

Q: What can booksellers do to help bloggers? A: Be their champions, too!

1) Offer bloggers drop-down buttons on your website (like SLJ with Betsy Bird and 7 Impossible Things Before Breakfast. Like Publishers Weekly). Ask store patrons who blog if you can link to their blogs.  Help them love you! Make your site a hub for good blogs. Draw people to your site in this fashion. Develop relationships with those bloggers. Ask them to do interviews/ reviews of authors and books. Engage.

2) Offer bloggers shelf talk space to promote their favorite books. "Allow them to place this blogger recommends" tags by books they're passionate about.

3) Let niche bloggers  'adopt' a section of your bookstore and/or website/blog. They can help you nurture and grow that segment of your store and business, fueled by their enthusiasm.

5) Add bloggers to your press release list. This will give them time and the opportunity to blog about events.

6) Partner with bloggers to promote Groupon deals.  Caveat: booksellers must find the price point that works for their business and also lay down any restrictions clearly to customers. Give web savvy customers a deal and a great reason to put their clothes on, exit their homes, and hike to your store.

Blogger challenge to indie booksellers: Bloggers want to promote indie booksellers and encourage people to shop locally, but find ourselves linking articles to Amazon and Powell's. What should we do? Please give us other options! Suggestions are welcome.

The Word Hoarder: Engaging your customers through social media The Word Hoarder is the blog of Rich Rennicks, a book marketer and bookseller in Asheville, NC.

Directory of Book Trade People on Twitter This is an incredibly helpful, user-friendly list to help ease your search for connections, community and information.

Get In Bed With A Book Blogger Documents a successful informal partnership between bookseller Kelly Justice of Fountain Bookstore in Richmond, VA and Rebecca Joines Schinsky of The Book Lady’s Blog,  @bookladysblog on Twitter.

Posted by Amy-Baskin.blogspot.com at 11:41 PM 2 comments: 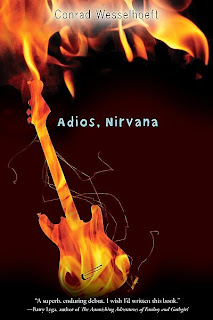 Here's yet another fascinating interview with Conrad in the West Seattle Herald.
Posted by Amy-Baskin.blogspot.com at 11:56 PM 3 comments: 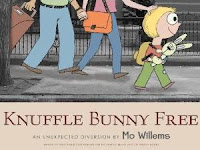 Mo Willems will be at the Clackamas Town Center Barnes & Noble Monday October 4th (that's tomorrow night, folks) at 6:30! He'll be reading from his latest in his adored stuffed animal series: Knuffle Bunny Free. Which, for Portlanders, begs the question: why, for the love of Jove, is he not reading at Powell's? (Probable answer: PR and parking.) Ah, well. No matter. Small (corporate) price to pay for a chance to hear a true picture book master read from his own work. I hope to heavens he highlights my favorite picture book of 2010 as well: City Dog Country Frog in which he collaborated with Jon J. Muth to make a spiritual tour de force on the circle of life and friendship for kids.

Thank the stars I checked my messages. Illustrator extraordinaire Ward Jenkins kindly tipped me off on this. Many thanks, Ward! 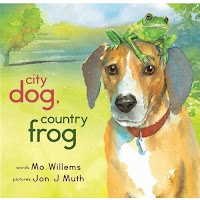 Don't miss out.
Posted by Amy-Baskin.blogspot.com at 10:26 PM No comments:

Musings on life, stories, and writing for both young and grown children.